Within a very tight time frame and under pandemic conditions, Feige FILLING, market leader for filling equipment has planned and manufactured seven fully- automatic fillers for a Chinese customer. Active support was lent by a Chinese colleague. 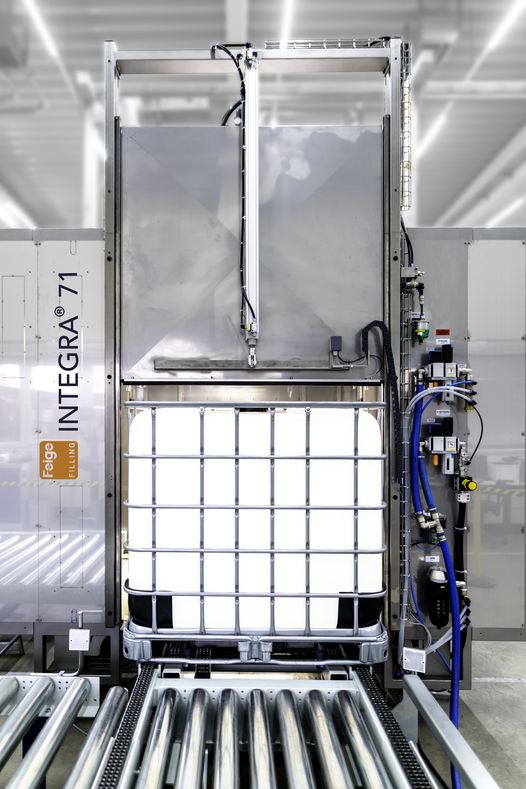 In Ningbo, near the town of Shanghai, the world-wide largest supplier of MDI (methylene diphenyl isocyanate) operates a production site. Greatest care must be taken when commissioning these products. In 2017, the Chinese company already relied on the expertise of Feige FILLING and ordered two fully automatic drum fillers INTEGRA® 86 for high-speed filling according to the most stringent safety standards.Seven machines, ten months time: a true feat of strength  In 2020, the MDI supplier from China had actually planned to expand to the U.S.A. but this project fell through due to political developments. So, without further ado, it was decided to expand the capacities in China and Feige FILLING received the award for seven new machines and was thus even able to outdo the strong Chinese competition. However, the time frame was narrow: By the end of 2020, four new drum fillers and three pallet filling robots had to be manufactured. And that was by far not the only challenge. Chinese mechanical engineer as interface

Partner on site is the sister company HAVER TECHNOLOGIES TIANJIN (HTT). Both companies are part of the German HAVER&BOECKER Group. Although communication could and still can only take place online due to the travelling restrictions in times of Covid-19, from the beginning there existed at least no language barriers: The reason for this is Haiyang Liao. Liao has studied mechanical engineering in Germany, then worked in his home country for a while before he had started his two-year work placement at Feige FILLING. The major Chinese contract was placed at that time. With his knowledge of German and Mandarin, Haiyang Liao was and still is the direct contact for both sides.

Four INTEGRA® 86 drum fillers for high-performance filling
Four stainless steel drum fillers based on the basic model of the INTEGRA® 86 were part of the new order. The entire construction plans had to be adapted to the country-specific specifications beforehand and own Chinese variants had to be developed as well as special requirements on MDI had to be fulfilled. Each machine is equipped with six stations and can fill 100 bung-type drums per hour, with six drums being simultaneously conveyed through the machine. The system is designed as special model for dangerous products and offers the greatest possible safety through the fully automatic operation and various features.

Three pallet filling robots INTEGRA® 71 in special design
In addition to the drum fillers, the customer from China ordered three pallet fillers for the fully automatic and calibrated filling of IBC and drums. Here the models based on the INTEGRA® 71 had to be adapted and exactly tailored to the requirements of the MDI supplier. The machines in stainless steel design are also completely enclosed. Control and operation of all seven systems takes place conveniently via the user-friendly FEIGE touch panel with integrated scale display. In addition, the INTEGRA series is characterised by the integrated VPN access – the virtual communication network permits remote maintenance and assistance: a unique advantage in times of Corona.

Remote support under pandemic conditions
Normally, engineers from Bad Oldesloe accompany assembly and commissioning of new machines personally, but the Corona virus makes travelling impossible. For this reason, the team from HAVER TECHNOLOGIES TIANJIN (HTT), including Haiyang Liao, supervises the work on site and exchanges information with the colleagues from Feige FILLING via the Internet whenever possible. Everyone is working together in shifts and with great commitment to be able to put the machines into operation as soon as possible. But it looks as if the final acceptance by the German technicians will probably also have to take place digitally.